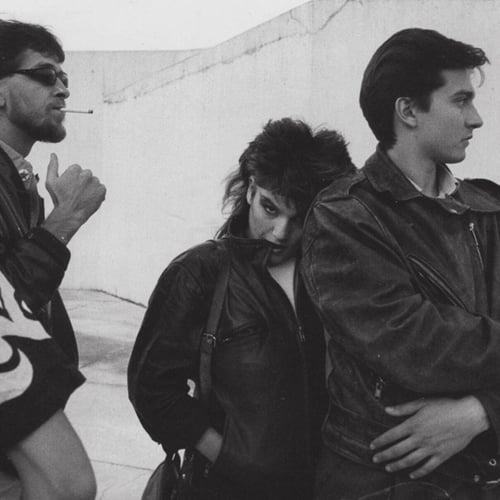 Discom distribution presents you another reissue from former Yugoslavia: Bastion's self-titled LP. Originally released on PGP-RTB in 1984, Bastion's album remained one of the most wanted synth wave albums from this part of Europe.

Bastion was formed in Skopje, Macedonia in 1983 by Kirl Dzajkovski, who played and programmed the most of the music, bassist Ljubomir Stojsavljevic, singer-actress Ana Kostovska and movie director Milco Mancevski who wrote the most of the lyrics. Their music is an unusual interpretation of the new wave perceptibility presented in lavish 80s synth textures, expressive vocals, and funk-oriented slap bass. The whole album is "L'art pour l'art" , every song is art by itself, although the symbolism in Milcho Micheski's poetics brings strong message. From glamorous "Hollywood", ritaul "Deca Sunca" (Children of the Sun), relaxed A Hot Day In The Mexico, groovy "Mesec u Solji" (Moon In The Cup), to ironic Mister Kompleks, sentimental "Lica u Ogledalu" (Faces In The Mirors), mysterious "Molitva" (Pray) and tribal "Boje" (Colors), you will come across to plenty of fine tunes. This album has not only survived the test of time, it has already received a halo of unrepeatability. It will remain as a testimony of one moment of inspiration, homage to beauty which will never be the same.