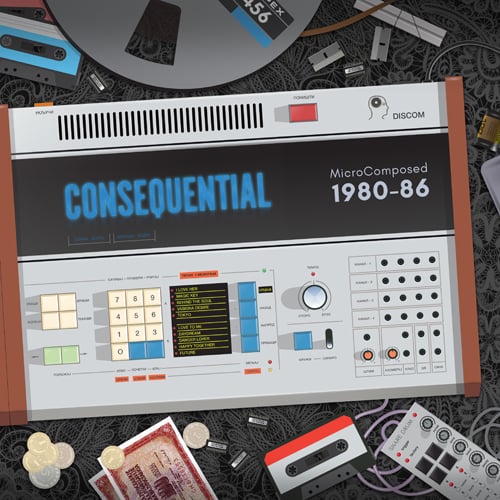 When you are strictly focused on releasing music of the past from one geographically defined area, as we are with the music from former Yugoslavia, it seems quite natural to fear that eventually, there will be no quality material left to discover. However, when you have the passion and high ethical standards, your aspirations start to be appreciated not only by the music lovers, but also by the artists themselves, and sometimes, these artists will even get intimately involved in rescuing their forgotten works. In this case, our relationship with two Yugoslavian electronic music pioneers, Zoran Jevtic (known as the founding member of groups DATA, Sizike, Master Scratch Band and Digitron) and Nikolaj Bezek (an important contributor of early Belgrade's electronic scene), overcame professional boundaries, and befriended us in a mission of revealing early Yugoslavian electronica. Our new release, Consequential-MicroComposed 1980-86 LP, is an outcome of that mutual effort. The record represents a collection of 10 previously unreleased tracks made between 1980 and 1986 by their group Consequential, recorded in one of Yugoslavia's first purely electronic music studio, in Serdar Jola Street, Belgrade. Thanks to its essential and, for local conditions very rare, gear like Roland MC-4B analog sequencers, Roland System 100M modular synth, SVC-350 and VP-330 vocoders, Jevtic and Bezek were able to create music that they truly liked: a combination of catchy vocoder-based, experimental 80s electronica, with a strong influence of Italo disco and synthpop!

Jevtic and Bezek began their musical journey in a pretty interesting way. Like in a legend, they meet at a Roland's stand at the very first electronic instruments fair, held in Belgrade in the early 80's. Bezek asked Jevtic to recommend some gear for his new studio. In jest, Jevtic, who then worked with Vracevic in group DATA, made a list of 10 of the most desirable studio items and synths available. Both Jevtic and Vracevic, who at the time struggled to finance the equipment, never seriously expected their new acquaintance would actually get anything from that list. But they were in for a huge surprise, when shortly after, Bezek procured everything and more. “What next?" he asked, and the story unfolded. With the studio assembled, Jevtic and Vracevic got on with recording their DATA, Sizike and Master Scratch Band projects, as well as their friends Max&Intro. At first, and due to his initial inexperience, Bezek wasn't greatly involved, but after one late session when they played around with TR 808 and Pro One, Jevtic and Bezek created the bass line for the famous Sizike's song Don't Stop! Instantly, Jevtic realized that the two could collaborate on a deeper level! And indeed, their sheer love of analog synths led them to gradually compose a number of songs reflecting their interest in the music and artists that influenced them most : Kraftwerk, Yello, Depeche Mode, YMO, Logic System, Landscape, Torch Song, Georgo Moroder, Miko Mission, Ken Laszlo, Silver Pozzoli etc ... Thus, Consequential-MicroComposed 1980-86 LP is a selection of their best work.

The compilation opens with I Love Her, which is a previously unpublished version of the track released on “Sizike-U Zemlji Cuda With Lost DATA Tracks” LP. Surprisingly, this version is technically better produced, with better groove and impressive sounds effects. The next is the equally groovy and even catchier, Magic Key. A beautifully vocoded sound of Roland SVC-350, intense dance beats of Roland MC-4B, hypnotically thrilling lines of SC Pro One and Korg Mono Poly synths, make this track so attractive, that it is hard to believe no one had ever heard it previously. The magic continues in next songs: Behind The Soul with its analog, dusty sounds of Roland SYSTEM 100M, TR-808 and SH-101 and Vasiona Desire, a top track of the compilation, with amazingly intense grooves of Roland TR-707, SC Drumtraks and psychedelic space melodies of the very rare RFS Kobol synth. A side closes with Tokyo, an unconventional, experimental song with inventive manually generated sounds effects of SYSTEM 100 and the remarkable Roland VP-330 Vocoder sounds.

B side rings with Italo disco atmosphere. The opening song Love To Me is a fantastic example of Jevtic and Bezek talent for composing dance-oriented songs: quality analog rhythm production in combination with memorable, sentimental themes. Such artistic mark is also evident in the next songs Daydream and Danger Lover, while Happy Together is a classic ode to the genre. The last song, Future, fascinates with its naivety and charm, while showing that dance music can carry further sensitivity besides mere fun.

Although Consequential's music relies heavily on an arsenal of vintage synths and its 80s production, it still sounds impressively fresh today. It will immediately resonate with the community of diggers, aficionados and DJs, since it is so very rare to come across an unknown music from the past, that happens to be so danceable. Fully remastered, with exceptional artwork (also executed by the artists themselves), this record stands out as an act of bravery, an incredible achievement of restoration of the forgotten 80s soundscape to which we can dance, laugh, yearn and dream.

(First 100 copies, which can only be purchased directly from the label, include a special download card for 3 additional, never previously published Consequential songs).