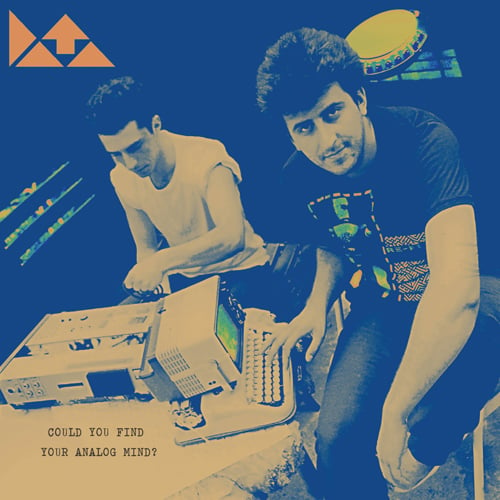 After releasing Sizike-U Zemlji Cuda With Lost DATA Tracks LP where we issued six previously unreleased tracks of group DATA, we thought that we have done everything we could in order to bring you some great unknown music of this group. Hope that we will find more material one day was still present, but we could hardly believe it will ever happen. What a misapprehension! It turned out that old, mysterious 80's Belgrade with amazing people and their wondrous destinies has a lot more to say. We will never forget one afternoon meeting with these artists which was a starting point and a clue for the further investigation. As it happens in a fairy tales and quests for the lost treasure, after lot of wondering, finally the luck came on our side. We met Nikolaj Bezek, an important contributor for the whole 80's Belgrade scene in whose home studio Max&Intro, Sizike, DATA, Master Scratch Band made their first recordings. Nikolaj's passion for music and love and respect for his two friends - artists Zoran Jevtic and Zoran Vracevic didn't allow him to destroy their old recordings, made more than 30 years ago. It seems like he believed in them more than they believed in themselves. Digging, exploring, restoration and mastering these old recordings that came right after were pretty challenging too, but incredibly exciting. Nikolaj was with us, as he had been with Jevtic and Vracevic 30 years ago. Finally, as an outcome, the new release is born: DATA-Could You Find Your Analog Mind? ,LP compilation with 12 previously unreleased tracks of group DATA made between 1981 and 1984. The record represents an important and comprehensive musical testimony of early Belgrade's electronic scene made by two pioneers Zoran Jevtic and Zoran Vracevic. It shows both Jevtic and Vracevic as pioneers of remixing and editing as well as composers of early Yugoslavian synth pop made under influence of Japanese scene!

The whole album is divided into two sides as two entities, but with distinct connection. A side reveals quite interesting set of songs and remixes made in the time when editing and remixing implied cutting and gluing magnetic tapes with no digital processing of sound and mixing. This was the time of analog sequencers, synths, rhythm machines, vocoders- quiet robust machines which were very hard to use and which generated a pretty much noise in signal processing. Programming of these gears was really complicated and if you wished to make your own sound, you had to be more into technology and science than into music. In addition, the lack of storage capacity in these early models of synths required special approach in composing and playing: you had to be extremely creative in order to make some interesting sounds! Actually, all the beauty consisted in that approach: you had to make everything from the scratch, all was yours, nobody else had exactly the same tone and whenever you wished to call it you had to be inspired! Through all six songs on A side we can find such inspiration, plenty of unique tunes, lines, melodies, patches, samples, sound effects, made in moments of creative madness. Accordingly, we cannot find anything strange in the fact that all songs on A side sound as a whole, special session disengaged from usual patterns in song structuring. The whole approach in sound creating was transposed in approach to song structuring. The result is awesome: a bunch of experimental electronic with lot of amazing sounds and patches in brilliantly funny atmosphere. Creativity at its best!

B side is equally thrilling, but completely different in concept and atmosphere. Here we can find more obscure, dark and mysterious synth pop. Like many British synth pop bands in late 70's and early 80's, DATA was influenced by Japanese pioneers: Yellow Magic Orchestra and Logic System. In bringing synth pop, wave, experimental electronic genres to their own country, Vracevic and Jevtic knew that they must find their inspiration from the source, where everything began. That's the reason why their music sounds so authentic, they absorbed only influences which were undisputable- as the sounds made by brilliant minds of Roland and Korg's engineers, or in magical synth atmosphere by Takahashi, Sakamoto , Hosono, Matsutake and others. From opening track "Japon" till the last track on the B side "Secanje Na Ljubav", DATA is convincing: strong authorship with healthy influence and very intimate and poetic expression all the way through. Two Eastern Europeans dream about distant land of synth masters. Unique!

Ultimately, this record reveals the totally new ranges of early Belgrade and Yugoslavian synth pop scene. With outstanding analog remixes and yugo synth made under the influence of Japanese pioneers, it stands side by side with the most interesting archival releases of the year. Record's final touch, from transparent blue vinyl, 80's cover design technique, list of equipment, to its concept described in a title, is designed to make your journey through the world of analog electronic unforgettable.

This compilation represents 12 previously unreleased tracks of group DATA made between 1981 and 1984.
Special thanks to Nikolaj Bezek for saving master tapes and his mastering work.
Limited to 500 copies.