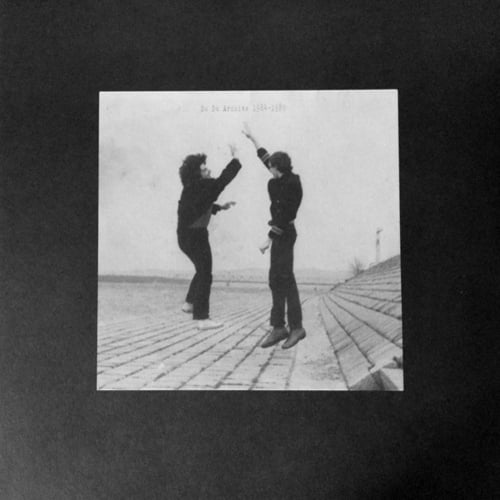 by Du Du A

Discom proudly presents Du Du A- Du Du Archive 1984-1989 LP, a collection of previously unpublished and rare tracks of Belgrade's cult band Du Du A. Discover the music of the group whose leaders Dejan Kostic and Zoran Zagorcic primed for their never-released second album and find out why they earned a cult status among DJs and collectors worldwide!

Du Du A was formed in the early '80s, in NYC, by Dejan Kostic during his sound production studies. The first line-up in Belgrade included saxophone player Vuk Vujacic as a co-author. In 1982 they released a 12" Maxi Single: Ja Tarzan, Ti Dzejn "Jungle Rap"/ Afrikanac Iz Beograda for RTB, the first ever rap music record in the former Yugoslavia. The next year, they released an LP album called Primitivni Ples (eng: "Primitive Dance") with Zoran Zagorcic as co-author, vocalist, synthesizer player and percussionist featuring some of the most creative musicians of the time: Sasa Habic (the author of Bebi Dol- Mustafa), Goran Vejvoda (known as guitarist of Kozmetika and Rex Ilusivii's collaborator), Bebi Dol, Dragan Mihajlovic (one of the founders of Katarina II) and Nebojsa Antonijevic (the founder of Partibrejkers). This album brought an unusual mixture of styles such as funk, reggae, rap, and dance, all flavored with excellent musicianship and humor. The band was also active in 1984, performing various excellent concerts and releasing one SP Romance/Irie for Jugoton, as an introduction to the new album. However, that year Dejan Kostic went to Kairo to perform in clubs along with Bebi Dol. After returning to Belgrade, they recorded just one song Pustinjska Tajna (A Secret Of The Desert) with Zoran Zagorcic as an author, vocalist and keyboard player. Dejan and Zoran agreed to compose and record songs separately, and to bring them together for the new album. After they completed the tracks, the country's major labels RTB and Jugoton, both declined to release them. They left the band and Dejan Kostic formed Du Du Ah with new crew of musicians, who played some of the songs planned to release on that album (later they have released album "Ritual" with completely different songs). Zoran Zagorcic, along with members of Electricni Orgazam, formed the band "Fetish" which also played some of the songs intended for the album. The compilation Du Du Archive 1984-1989 LP contains 5 previously unreleased songs composed by Dejan Kostic, and 3 previously unreleased songs composed by Zoran Zagorcic, with 2 songs that were published in Zoran Zagorcic's private CD-R edition.

The album opens a funky dance beat song Street's The Place, with a characteristic "Du Du A" saxophone riff, slap bass groove, cool funky guitar licks, female rap vocals, and Dejan's autobiographical NYC'S slang vocal – a well known Du Du A sound we adore! The next track called Blinded, is to some extent different, but not less thrilling: tricky funky riffs, unusual harmony patterns and breaks in combination with perfect female alto singing, bring a new dimension to the band's music. This is particularly evident in the next tracks: Love Festival – a catchy mid-tempo funk score, and Fantasy – a tender soul ballad with warm alto saxophone theme. The A-side finishes with Riff Ruff, the band’s early editing attempt whose goal was to capture NYC bustling atmosphere.

B side with Zoran Zagorcic as the author brings more experimental, psychedelic, “afro” sound. Voodoo Party is a brilliant example of Zagorcic's contribution to Du Du A music: 9 minutes of hypnotic beats, filled with exotic vibes, unpredictable guitars and controversial combination of relaxed and tense atmosphere, characteristic for Belgrade's night-out hustles and parties of the '80s. The initial working title of this song was Du Du Party! The next song Angst, Schmerz, Seele, portrays Zagorcic's interest in the exploration of unknown rhythms and sound textures, combined with minimalistic, powerful evocative lyrics. This is particularly evident in Pustinjska Tajna (eng: A Secret Of The Desert), recorded by Zagorcic and Kostic together and inspired by their journey to Egypt. However, the highlight of the B side is a catchy Living And Dying, which showcases Zagorcic's talent of creating esoteric sound atmosphere with strong meaning-of-life lyrics, without losing the song's appeal. The final ambient Transylvania, the continuation of the first song Voodoo Party, concludes the record: the party is over, time to go home, people are relaxed and calm.

Thoughtfully put together, this compilation reveals unknown facets of the Belgrade's legendary band, keeping alive the warm memory of people who once made Belgrade an influential musical center. Giving new life to their music, we hope that new generations of listeners will carry the legend further and enjoy them as much as we do.

B1 Voodoo Party
B2 Angst, Schmerz, Seele
B3 Pustinjska Tajna
B4 Living And Dying
B5 Transylvania

All tracks are previously unpublished, except B1 and B4 which have been released in artist's private CD-R edition.Selected from artist's archives, now in possession of Igi Kostic, the son of Dejan Kostic (1956-2013) and Jelena Zagorcic, the wife of Zoran Zagorcic (1957-1998). Recorded in Belgrade between 1984 and 1989. Special thanks to Dejan Stanisavljevic.

Dedicated to the memory of Du Du A.