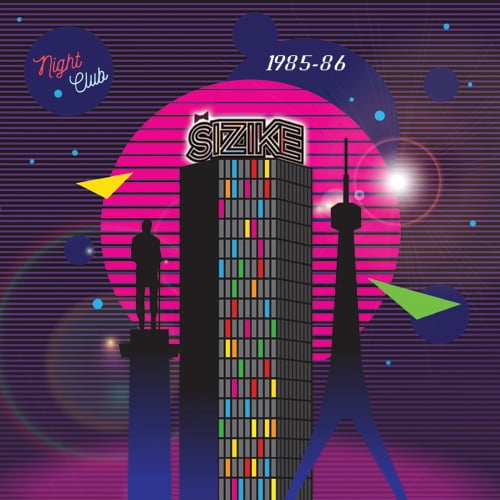 Sizike–Night Club 1985-1986 is a collection of 9 previously unpublished italo-disco, Hi-NRG, synthpop tracks. As in our previous Sizike release, fans of the 80's sound & gear will relish the authentic 808 beats, vocoded rap and vocals, Pro-One signatures and hand-tweaked analogue FX. Moreover, they will be meet with a good old song structuring, nearly 2-minute-long intros and plenty of instrumental parts between verses, making many tracks sound like remixes rather than Sizike’s typical tunes. All vocals are sung in a witty, cheeky girls style, with lyrics in English emphasising fun and having good time.

A-side begins with Sizike's best known song: Don't Stop!, but in a significantly different arrangement. Compared to its previous version, with lyrics in Serbian, this track sounds more raw, unpolished and dusty, with a remarkable groove. If you liked the original Don't Stop!,this one you will simply adore! The next song, Be My Lover, introduces more italo-disco feeling to the record. Vintage string riffs, naive and predictable harmonies, cheesy lyrics and vocals, flavoured with Simmons toms and vocoded rap. No opportunity is lost in the catchy Live With A Lie, which surely should’ve been on Italo charts back then. A-side closes with the song simply called 1,2,3,4, its high tempo octave bass delivering intense energy and vibe that will drive your feet to dance.

B-side features a really special opener: Soldier Boy is a mid-tempo, italo-synth-pop pearl, brilliantly composed and structured (intro lasts 1:21 min), showcasing the irresistible Roland System 100M, punchy LinnDrum and ripping synth bass. Her, the vocals sound more advanced and its lyrics shun the overall light-hearted premise found in Hi-NRG Love All Around, Too Shy For You and, to some extent, I Can't Stand. However, the top track of the album comes at the very end: Night Club unifies the musical endeavours two Zorans were developing throughout the album in an almost perfect way. The song structure is broad but not too extensive, the harmonies and melodies simple yet exciting and while the singing is relaxed but convincing, the lyrics are clear and evocative. The combination of instruments optimal without overwhelming the whole expression, yet we must point out the fantastic, pulsing Pro-One bass, hypnotic synth riffs of Korg Mono/Poly, warm string pads of Juno 106, and more...

Ultimately, Sizike–Night Club 1985-86 LP brings fresh sparkle to the old gold. It is not just a testimony to the lost music, it is a juxtaposition of one unjustified musical negligence. It is hard to understand how these songs were not a part of Italo-disco charts during the '80s and it is even harder to understand why none of them were

published. Surely, if Den Harrow, Bananarama, Tom Tom Club, Baby's Gang could successfully top the charts in those days, then one Italo-disco-inspired group from Yugoslavia should’ve at least had a record! Well, we believe it is never too late for good music… even if it’s brought out 33 years later!

This is selection of 9 previously unreleased tracks by group Sizike recorded Belgrade, Yugoslavia 1985-86.

First 100 copies include a "Secret Download Card" which can only be obtained by buying record directly from the label.