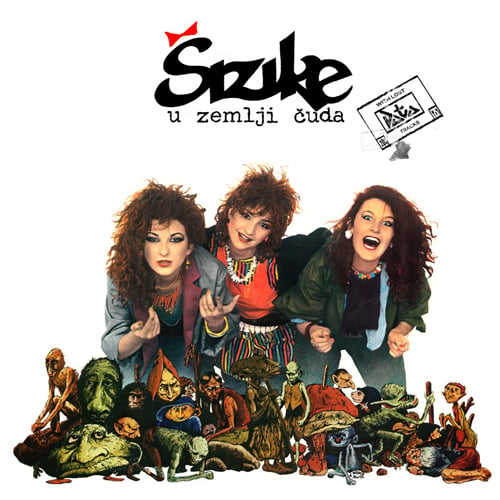 Story about 80's electronic scene in Belgrade wouldn't be complete without considering Zoran Jevtic and Zoran Vracevic's work in group DATA, Sizike and Master Scratch Band. Along with group Beograd they pioneered total electronic concept in former Yugoslavia, bringing to home country new genres and new sounds. Early 80's were a time of late analog and early digital synthesizers and sequencers, vocadors, Roland TR rhythm machines, electronic drum kits etc... and since both Jevtic and Vracevic had one of the largest collection of synths and gears in Belgrade, they appeared as collaborators in numerous projects for many musicians in that time: Sladjana Milosevic, Bebi Dol, Aska, U Skripcu, Beograd, Max&Intro, Kornelije Kovac, Massimo Savic etc...

All these tunes, together with their prolific songwriting, can be found in ‘Sizike - U Zemlji Cuda with lost DATA tracks LP'. This record represents an official reissue of six songs from their original 1985 album U Zemlji Cuda, and an official edition of six previously unreleased songs of group DATA from 1981-1984 period. Here you can hear some of the brightest moments of Vracevic and Jevtic's early career: a catchy dance anthem Don't Stop; a heavily-vocoded groove of I Love Her; a punchy Robot Life with very nice rap by Zoran Zagorcic from Du Du A, and recently discovered 80's electronic gem Nebo Zove with Delca (U Skripcu) on vocals. In addition to these, the record features plenty of other unmissable DJ material, especially interesting for those into minimal wave sound and 80's electronic. Ultimately, you should check out why leading independent labels worldwide wanted to release this material so badly ever since these songs found their place in sets of leading DJs of the genre.
(https://goo.gl/pwr5Fb).

B side (DATA tracks):