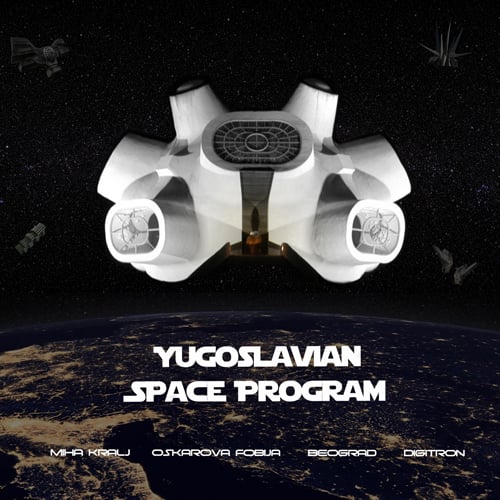 Yugoslavian Space Program is the first ever electronic space music themed record from former Yugoslavia. It spans the period between 1981 and 2015 and is a result of long-term research by Discom record label as a part of their ultimate effort to present undiscovered electronic music from this part of Europe. The compilation is made in collaboration with yugo artists, whose work is already highly appreciated by record collectors and DJs worldwide.

Equally interesting, the B-side showcases influences of the Berlin school of electronic music. First, by the legendary group Beograd’s "Eenterstallar", which is a Klaus Schulze-like psychedelic contemplation, and their second song reminiscent of 70's krautrock masters like Tangerine Dream, "Mozak Primopredajnik" (Brain Sender Receiver). However, the highlight of this compilation comes from Digitron, a Serbo- Croatian group formed by Zoran Jevtic (of Sizike, Data, and Master Scratch Band) and Andre Koy. Like their heroes the Kraftwerk, these guys excel in forging their unique synth sound. Their song “Digital Minds” is a perfect dystopian vision of a future society, while the equally electrifying track “Kosmos”, akin to many Kraftwerk songs, draws its inspiration on the Soviet technology and culture.

The distinctive characteristic of featured recordings is the fact that all sounds and patches are synthesized and manually programmed, without extensive use of commercial samples or drum loops. In addition, the entire concept of this meticulously devised compilation, from its music selection to sound design and artwork, covers a wealth of messages and symbols of the time in some detail. On the record cover, along with sketches of Yugoslavian scientists and astronautic pioneers, whose ideas were way ahead of their time, you will also find communist-era sculptures, monuments and buildings depicted as flying crafts or celestial objects.

The goal to present Yugoslavian space electronic music in much broader context – as a result of perception and aspirations of generations of those who grew up and lived in Yugoslavia – is more than perfectly captured in this release. The fact that the country itself does not exist anymore and that this kind of music is thus impossible to create again makes this record even more significant today.